Touch-Key Guide (How It Works) 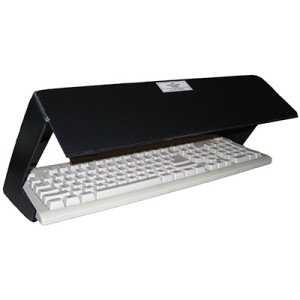 Computer users recognize that a productive keyboarding skill requires the touch or non-sighted operation of the keyboard. As the rehabilitation of non-touch or “hunt & peck” operators is extremely difficult, it is essential that a touch keying foundation be established during the student’s introduction to the keyboard. Whether a touch or “hunt & peck” keying capability accompanies a student throughout his lifelong involvement with the microcomputer is determined during the initial days of keyboarding instruction.
As nature encourages man to seek the “easy path,” it is natural that beginning keyboarding students desire to apply only their stronger, more dexterous fingers in striking the keys. In failing to employ their “weaker” ring and little fingers, the index and middle fingers are forced to move comparatively long distances to operate keys properly controlled by the less functional fingers; this process demands that the fingers be visually guided, resulting in a relatively unproductive “hunt & peck” keying system.

The role of student maturity

To voluntarily become a touch keyboarder requires a heavy degree of personal maturity and related self discipline. From substantial classroom observations, the writer approximates that 75% of high school students possess the self discipline needed to acquire a touch keying skill; for the pre-high school student this figure drops to perhaps 25%. Typewriting, keyboarding’s predecessor, from an ease of instruction standpoint was fortunate to be high school based.

Today as computer related keyboarding instruction emerges in the pre-high school curricula, its instructors–using traditional procedures–cannot expect to equal the instructional results attained in high school typewriting programs. While non-touch or sight keying was a significant problem for high school typing instructors, it promises to be far more severe in pre-high school keyboarding programs. For a touch keyboarding skill to be a realistically expected outcome of elementary and middle school keyboarding instruction, the involved students must be “forced” to apply the proper fingers while operating the keyboard. From a practical viewpoint this can only be accomplished by depriving the student of the opportunity to visually guide his/her fingers about the keyboard.

What configuration provides the most efficient keyboard vision shield? Ideally, a vision shield should be low cost, lightweight, durable, collapsible (compact), simple in classroom management, accepted by students–and instructionally effective. In accord with the above criteria the writer has developed a 1994 U.S. patented keyboard vision shield titled the Touch-Key Guide™. This instructional device is an outgrowth of the writer’s classroom experiences as a typing and keyboarding instructor.

The standard keyboard for the microcomputer is 17 to 19 inches in width and 7 to 8 inches in depth, variations that pose no problem in the construction of a generally applicable keyboard shield. The Touch-Key Guide™ consists of three basic components: The vision shield positioned between two vision shield supports. The vision shield measures 18 inches by 5 inches, with each of the two shield supports measuring 10 inches by 5 inches. The complete shield is made from cardboard or a plastic material called Coroplast measuring 38 inches by 5 inches with a 1/8 inch thickness (see figure 1). For both durability and lightness, the cardboard version is made of 275 lb. test B-flute.

In standard position the front portion of both shield supports are even with the front edge of the keyboard (see figure 2). For the user this permits viewing of the frequently operated Escape key and the horizontal row of function keys, all non-touch operations.

Figure 3 provides a left side view of the Touch-Key Guide™, the right side view being its reverse. Note the approximate 40 degree angle of the vision shield which allows the keyboarder to observe the keyboard by leaning forward and looking downward; this procedure, while fully adequate for visually placing the fingers on the home keys, etc., is awkward and “unsightly” when the student attempts to engage in “hunt & peck” keyboarding.
The front edge of the vision shield is 4 1/4 inches above the plane of the table that supports the keyboard, providing sufficient room for normal hand and arm movement. The cut-out sections of the shield supports allow free hand movement when placing fingers on the keys as most users move their hands in a sweeping out-to-in horizontal motion to reach the home key positions. Also the support cut-outs permit the Escape key and other keys located at the rear of the keyboard to be reached without “bumping” the shield support with the hand, wrist, or arm.

With the shield supports folded against the vision shield (see Figure 4), the compactness of the device permits it to be stored under the keyboard, atop the monitor, or collected for group storage.

Typing on a blank keyboard was a widespread activity employed by typewriting instructors to convert “hunt & peck” students into touch operators. Blank keyboards normally resulted from the placement of tape or a blank cap over each key. Today, the blank keyboard has been largely abandoned due to its inability to enforce touch keying. The failure of the blank keyboard was due to the education’s assumption that students were visually searching for key locations rather than visually guiding their finger movements. However, all students — even “hunt & peck” operators — recognize the value of knowing key locations. The memorization of individual key positions occurs involuntarily as well as voluntarily due to the effects of practice; after striking the “A” key a zillion times, the student becomes well aware of its keyboard location regardless of the mental effort applied to this task. However, if the left middle finger rather than the correct left little finger, is used to strike the “A” key, this key forever remains a sighted, non-touch operation. Touch keying is based on systemized short finger movements which permit the involved finger to be guided by muscular (or motion) sensations, a process technically described as kinesthetic feedback.

As keying instruction moves from the high school to ever earlier grade levels, the primary instruction problem relating to this transition is obvious: Keyboarding, relative to traditional typewriting, is dealing with highly immature students. An added dimension of this problem is the interaction of pre-high school students with home PC’s and the “self-taught” hunt and peck keying habits they bring to keyboarding instruction – – habits that must be “relearned.”

Few education failures are as obvious, or as wasteful, as those involving students who “complete” a keyboarding course, but continue to engage in “hunt and peck” key entry. Why should a keyboarding student who possesses normal student characteristics, yet is unable to touch operate the computer keyboard be awarded a passing grade?

The Touch-Key Guide™ is an efficient and practical teacher aid. It sanctions, or legitimizes, student sight deprivation, an instructional procedure that typing and keyboarding teachers have long improvised through the use of taped paper, manila folders, formed cardboard, held books, etc. To teachers who feel this devices infringes upon the student’s classroom “freedom,” consider the cruelty of permitting a student to freely carrousel through a keyboarding course –sans a touch keying skill — into a lifelong encounter with the keyboard controlled computer. Keyboarding courses that allow students to “successfully” exit without a touch entry capability are doing a great disservice to students, and are certainly without purpose.